KAREL APPEL
Dutch, 1921-2006
​
Karel Appel is a painter born on April 25, 1921 in Amsterdam, Holland. His father was a barber. He studied at the Royal Academy in Amsterdam in 1940-43. Appel sought to develop an impulsive formal language based on life, in reaction to geometric academicism. He even founded with others an experimental group. In Paris in 1949, he focused on mastering creative power and did canvases that "look like they were done in a rage". An action painter, Appel gives full rein to his violent expressionism in numerous mural compositions and in stained glass windows.

In 1958 Appel established residence in Paris, and in 1959 he came to New York, where he now spends half the year. He won the UNESCO prize at the Venice Biennale in 1952, in 1956 the Stedelijk Museum in Amsterdam commissioned a large public mural from him, which was accepted after considerable public controversy. He was the youngest artist awarded first prize at the Guggenheim international exhibition in 1960.

Appel's career was as turbulent as his paintings. When he did a mural for the canteen in Amsterdam's city hall, some diners threw their lunches at it. Some years later when he designed six stained glass windows for a new church in the town of Zaandam, 300 parishioners refused to contribute to the building fund. To Appel, painting is 'a battle.' He pops his colors directly out of the tube, smears them around with fingers, palette knife and occasionally a brush. When the heavy, screaming colors look curdled enough, Appel appends a title, usually one that has no relation to the painting, since one cannot determine any subject matter to the canvas.
​
Appel is an impetuous and indefatigable worker, whose creative energy seems inexhaustible. The world he creates does not originate from a circumspect handling of ideas, but from an incessant exploration of form and color, of material, and especially of the personal gesture. The images which he evokes through his tumultuous process are highly concrete and tangible; "they have the same truth as things that have grown and developed, that have not merely been invented. Only after their emergence do Appel's images start to lead their own private lives, sometimes softly poetical, sometimes grim and aggressive." 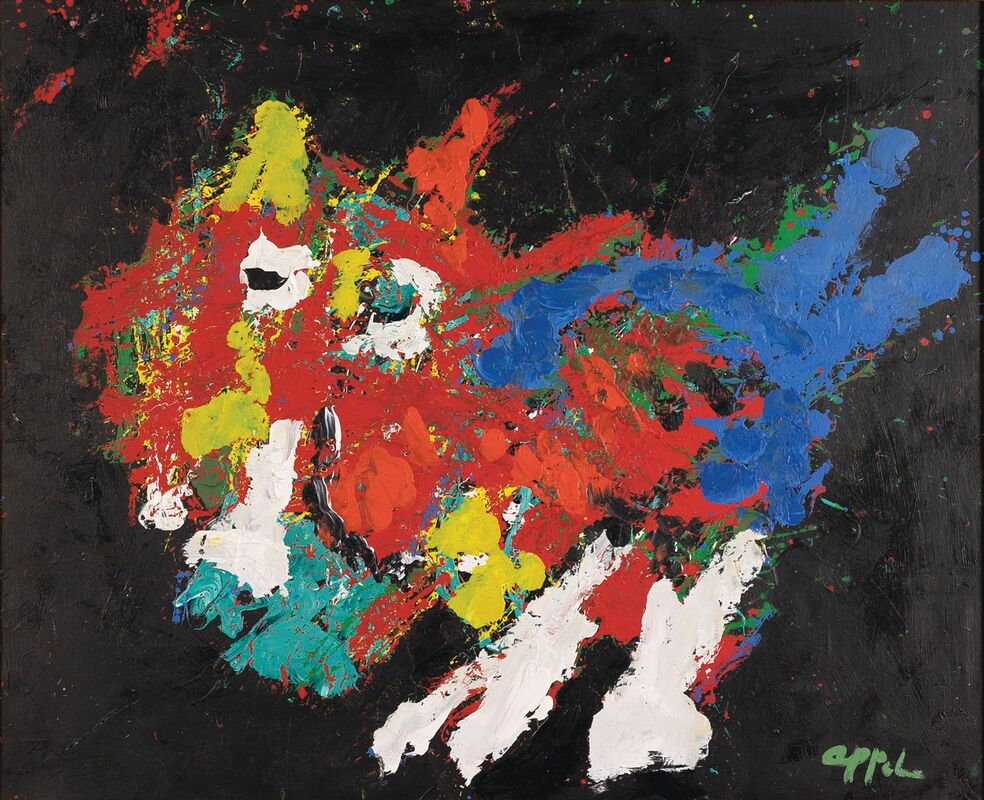