Alfred Thompson Bricher was born in Portsmouth, New Hampshire, to English immigrants. By 1851, he was living in Boston, and may have been studying art there at the Lowell Institute. In Boston, he became familiar with the art of the Hudson River School. He was inspired by Luminists John Kensett, Martin Johnson Heade, Sanford Gifford, and Fitz Hugh Lane. Bricher had established a studio in Boston in 1859, where he displayed his sketches .

He worked at Mt. Desert Island in Maine and in Northampton, Massachusetts, New England and New York state. He also began to use watercolor during the '60s. During that time he was employed by the Louis Prang publishing house, the self-proclaimed invented the chromolithograph. Eventually twenty-three of Bricher's paintings were created as chromolithographs by the firm.

In 1868, Bricher married and moved from Boston to New York, setting up his studio at 40 West 30th Street. During the next decade, he was influenced by the emergence of a younger generation of artists who were dedicated to experimenting with new techniques and developing personal styles. Affected by the art of his time, Bricher began to work in a more spontaneous and painterly manner, but he remained dedicated to capturing quiet, light-filled scenes of coastal areas and often rendered forms with a precision that reflected his continued adherence to Luminism. During the 1870s, Bricher became active in many important art associations, in particular, the American Watercolor Society. He also became affiliated with Swedenborgianism, a religion to which William Page and George Inness also subscribed. Affected in his art by the ideas of Swedenborg, Bricher created works that had a symbolic component in which forms were bathed in soft misty glows. Between 1878 and 1884, Bricher included figures in his landscapes, mostly women shown in leisure activities. These images have similarities to some contemporaneous works by Winslow Homer.

In the 1880s, Bricher adopted a more tonal approach. His colors had always been predominantly pale blues and greens with touches of intense yellow; all harmoniously blended to convey the sensations of bright, sunny days. Now he concentrated on recording atmospheric conditions, which he conveyed by emphasizing a single, dominant color.

Following his second marriage in 1881, Bricher spent summers in Southampton, Long Island, where he created a number of views of the expansive coastline and the village. However, throughout his career, Bricher traveled extensively, visiting the coasts of Maine, Massachusetts, Rhode Island, New York, and Canada.

Bricher's work is represented in The Metropolitan Museum of Art, New York; The Indianapolis Museum of Art; the Fine Arts Museums of San Francisco; the Dallas Art Museum, as well as many other public and private collections. 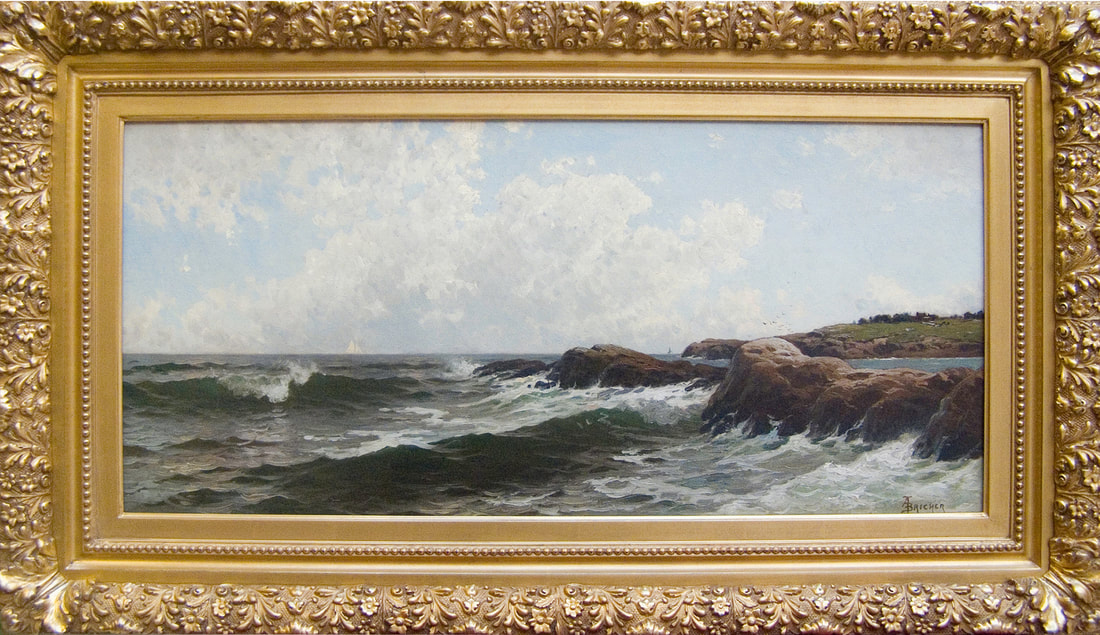