Jasper Francis Cropsey was raised on his family’s hundred-acre farm on Staten Island. The eldest of eight children in a family of Dutch and Huguenot extraction, Cropsey showed an early affinity for drawing and model-making. He was apprenticed to an architect, Joseph Trench, who recognized and encouraged his artistic abilities. Under Trench, Cropsey learned to paint in watercolor, a staple of the architect’s trade, and later received instruction in oil painting. Encouraged by the artists William Tylee Ranney and William Sidney Mount, Cropsey pursued his interest in painting while supporting himself with architectural commissions.
Cropsey was a landscape painter much influenced by the example of Thomas Cole. He first exhibited in New York in 1843 at both the Apollo Association (the predecessor of the American Art-Union) and the National Academy of Design. In 1844, he was elected an Associate of the National Academy of Design, inaugurating a fifty-year career as one of America’s foremost Hudson River School landscape painters.

The year 1843 marked an important beginning in Cropsey’s life. In that year he made his first sketching trip to the area of Greenwood Lake, a seven-mile-long scenic sliver of water crossing the New Jersey-New York border between Passaic County, New Jersey and Orange County, New York. Cropsey found not only inspiration on the shores of the lake, but also a wife. In 1847, he  married Maria Cooley, a native of West Milford, New Jersey. Together they traveled to Europe, visiting England, France, Switzerland, and Italy. The Cropseys returned to America in the summer of 1849. From 1849 to 1856, Cropsey spent winters in rented studios in New York City, with summer sketching excursions to the White Mountains, Niagara Falls, Newport, Rhode Island, the Great Lakes and Lake Champlain, and always back to Greenwood Lake, where Maria’s family remained. In 1851, Cropsey was elected a full member of the National Academy of Design. In these years Cropsey worked hard to support a growing family.

In 1856, Cropsey held a studio auction of his works in order to finance a second trip to Europe. The family settled in England and remained there for seven years. During this substantial period abroad Cropsey established himself as an artist in England, while maintaining and cultivating his American connections and exhibition schedule. With Maria’s energetic help, he socialized actively with leading English artists and art intellectuals of the day. Cropsey exhibited thirteen landscapes at the Royal Academy in London and achieved a solid reputation in England for his beautiful and (to the English) exotic depictions of autumn in America. When the family decided to return home in 1863, he financed the trip with the same device he had used in New York for his outward-bound journey: a successful auction sale at a London gallery.

In 1866, three years after his return from England, Cropsey purchased 45 acres of land in Warwick, New York, where he designed and had constructed “Aladdin,” a 29-room mansion with a studio overlooking Greenwood Lake, completed in 1869. The area around Greenwood Lake is hilly, marked by striking outcroppings of ancient boulders. Home to numerous streams, it is dotted with small lakes and ponds, all part of the foothills at the northern end of the Appalachian Mountain chain where the New Jersey Highlands meld into the New York Highlands. For the next fifteen years, Cropsey spent every summer in Warwick, painting scenes of the surrounding landscape. Aladdin, however, proved too expensive to maintain, and by 1884, the property passed completely out of Cropsey’s hands. In 1885, the artist and his family settled in Hastings-on-Hudson. That home, which Cropsey appropriately named “Ever Rest,” is still owned by Cropsey descendants, who have maintained his studio and established the Newington-Cropsey Foundation as a center for the study of the artist’s life and work. 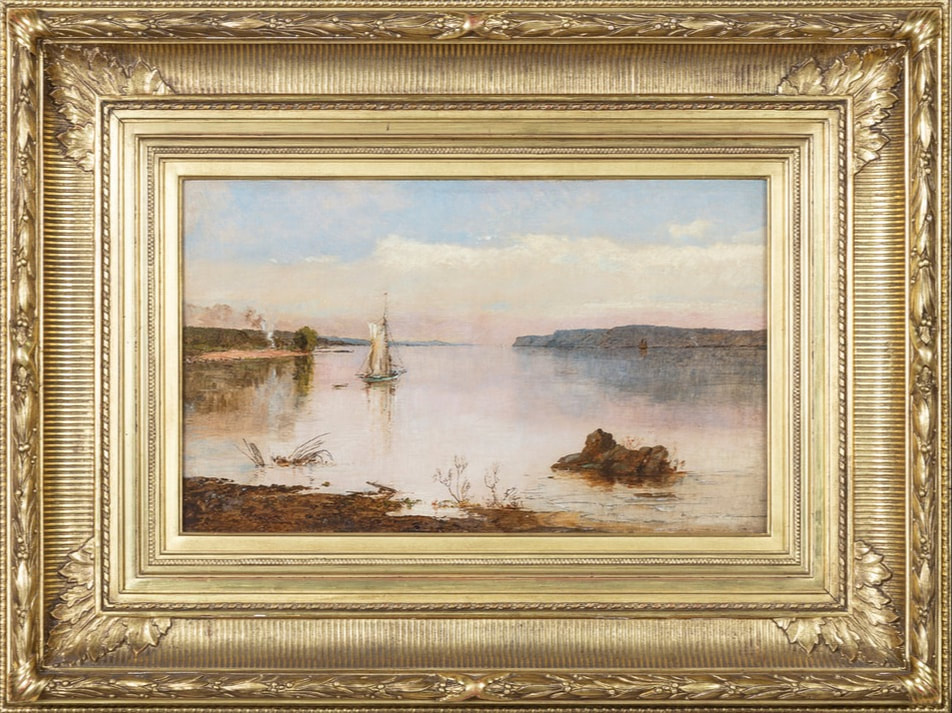