Abstract painter, printmaker, and teacher, Thomas Brownell Eldred, was born in early 1903 in Climax, Michigan. He began his education studying economics at Kalamazoo College, in Michigan, where he graduated in 1926. His interest in art was evident in the large portfolio that he had accumulated during his time there.  He was accepted to the Art Institute of Chicago and studied under John Norton. Eldred hitchhiked to New York where he attended the Art Students League, where he worked under Thomas Hart Benton and Guy Pene DuBois, after four years in Chicago and a stint with the Merchant Marines. Eldred declined an invite to the artist's colony, Yaddo, and instead took a teaching position (funded by the WPA program) at the Brooklyn Museum of Art. That job lead to his partnering with Werner Drewes, one of the founding members of the American Abstract Group.

The Guggenheims acquired Eldred's work to go in their new museum, The Museum of Non-Objective Art (now the Guggenheim Museum).  Eldred traveled to Paris and studied with William Stanley Hayter in his influential printmaking workshop, Atelier 17. Other artists there included Chagall, Jaques Lipchitz, Miro and Matta. When Hayter opened a school in the U. S. in 1940, Eldred joined him again, along with Robert Motherwell, Louise Nevelson and Jackson Pollock.

During the 1930s and 1940s, Eldred produced a body of work of which much of it illustrates the complex position of modernist abstraction at this time.  Eldred's art, engaging directly or flirting with abstraction, was eclectic. It reveals the impact of a myriad of major artists: Arp, Braque, Feininger, Kandinsky, Joan Miro and Pablo Picasso. His work can resemble that of the American artist associated with the American Abstract Artists group, and it can have the structure of modern geometric abstraction or the fluidity of biomorphism. Frequently both elements cohabit his work. Eldred died in 1993 in Grove City, Pennsylvania.
​ 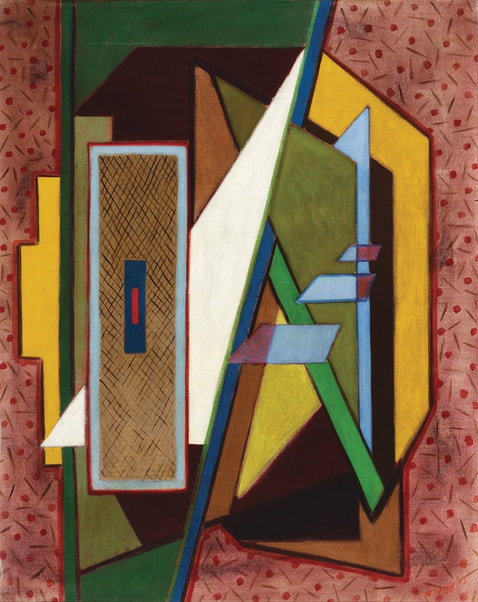