Woody Gwyn is one of America’s foremost contemporary landscape painters. He is known for vibrant panoramas that contrast nature with manmade structures. His subjects include Western mesas, wooded clearings, and long stretches of ocean. As  the American landscape evolves to include more highways, oil rigs and windmills, Gwyn familiarizes us to the shifts. His art embraces landscape as something bigger than us. The scale of many of his panoramas is so great that standing too close renders them abstract. One must step back for perspective.

Woody Gwyn was born in San Antonio, Texas, in 1944, and studied his craft at Pennsylvania Academy of the Fine Arts. His work has been presented in solo and group exhibitions in all manner of first class national and international museums including Le Centre Nationale des Arts Plastiques, Paris, France; the Tel Aviv Museum, Tel Aviv, Israel; the Luther W. Brady Art Gallery of George Washington University, Washington, D.C.; The Museum of Fine Arts, Houston; and the Museum of Fine Arts, Santa Fe. Texas Tech University Press produced his monograph,Woody Gwyn, which  records his significant contributions to contemporary landscape painting. He received the 2010 New Mexico Governor's Award for Excellence in the Arts, New Mexico's highest artistic honor. 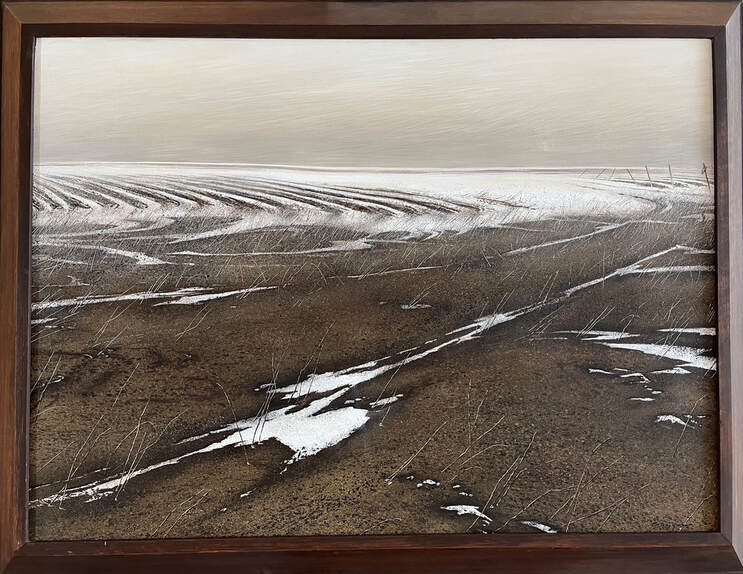