Sarkis Katchadourian was an accomplished and highly skilled artist. He first studied at the Reggio Institute de Belle Arti in Rome, next at the École des Arts Decoratifs in Paris, and finally in Munich. Born in Iran, he was notably an expert on Persian fresco painting and restoration, particularly those done in Isfahan in the 17th century and the period of Shah Abbas the Great. In 1932, a catalogue titled Persian Fresco Painting, Reconstructed by Mr. Sarkis Katchadourian from the Seventeenth Century Originals in Isfahan was published by the American Institute for Persian Art and Archaeology coinciding with a traveling exhibition on the reproductions by Katchadourian. Arthur Pope notes in the catalogue, "Fortunately, Mr. Sarkis Katchadourian appreciated the infinite charm of these murals, and sensed the loss that the whole world would suffer if they disintegrated before they could be recorded." In 1937 he worked for four years in recreating the almost lost 5th and 6th century frescoes in temple caves in India and Ceylon.

At some point in his life Katchadourian moved to the United States and lived primarily in New York City. He continued he work on Persian fresco painting and had a one-man exhibition at the Chicago Art Institute in January of1943, titled "Mural Paintings from the Cave Temples of India in Replica by Sarkis Katchadourian." This stop was probably the last leg of his traveling exhibition that began at the Musée Guimet in Paris in 1932. He also illustrated Omar Khayyam's The Rubaiyat, translated by Edward Fitzgerald.

Katchdourian was a muralist and painter of oriental scenes. He used several mediums including oils, watercolor, and fresco techniques. As well as his interest in Persian history and art of the past, he was aware of and influenced by the modern movements of Fauvist painters who "continued to paint the objective world" but "made these subjects abstract by violently detaching paint from its descriptive function (Arnason, 117)." More notably he was influenced by the American modern movement, particularly Arthur B. Carles. Katchadourian's Calla Lilies beautifully exhibits features similar to those of earlier still lifes by Carles, and can be compared to a work by this innovator titled Calla Lilies, 1922. His palette is rich in the depth of color. He has flattened the leaves, vase and background to their most basic shapes, creating the effect of the arrangement becoming discernable from the background. Yet the calla lilies are painted in a more realistic manner that not only draws attention to the flowers, but creates a sense of depth not normally seen in many American modern paintings. Information on Katchadourian is included in the Official Records of the Smithsonian Institution. 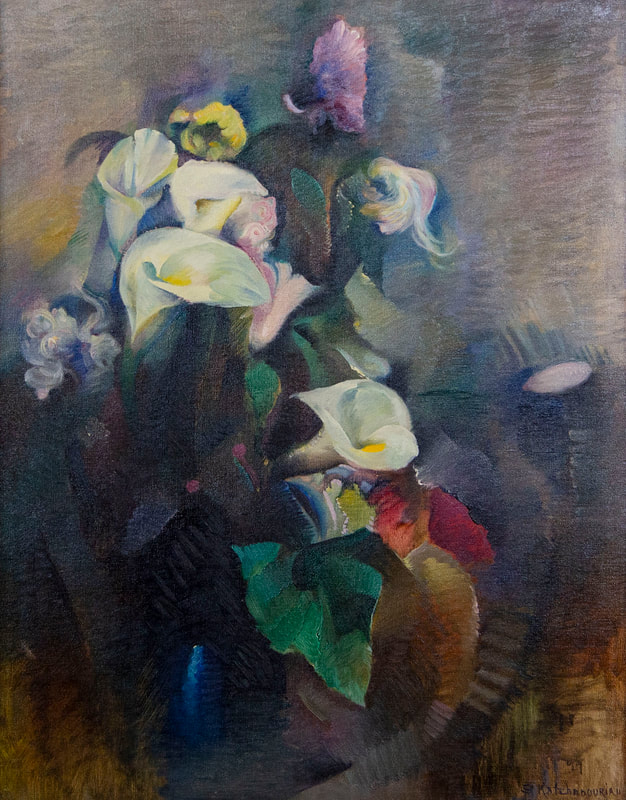