Marie Laurencin was born in Paris on October 31, 1883. She was born out of wedlock to Pauline Laurencin and Alfred Toulet, a man about whom she knew nothing until she was a grown woman. At the behest of her mother Marie at the age of eighteen began to study porcelain painting in Sevres, the leading porcelain factory in Europe at the time. She later returned to Paris in 1903 and enrolled in the modest Académie Humbert to study art. It was here that Marie decided to concentrate on oil painting at the urging of fellow artist and student Georges Braque, who introduced her to such other artistic luminaries as Pablo Picasso along with the writers, poets, musicians, and artists who called Monmontre home at the time. During this period Marie met the poet and art critic Guillaume Apollinaire, who became both her lover and her greatest advocate in the press. In these critical years before World War I Marie was involved with the experimental and avant-garde Parisian circle of artists which counted Picasso, Fernand Leger, Marcel Duchamp, Raymond Duchamp-Villon, Juan Gris, Francis Picabia, Robert Delaunay, André Lhote and Louis Marcoussis among its members. Her works hung along side of the Cubists at the Galerie Boëtie in 1912, although her pictures were decidedly more feminine than those of the Cubists. Additionally Marie collaborated on the Maison Cubiste with Duchamp-Villon and André Mare, a project which represented her first foray into the field of design. She was a part of the landmark Armory Show of 1913 in New York. After the war and a disastrous marriage to a German which caused the couple to flee France for Spain, Marie returned to Paris to embrace the Jazz Age in post World War I Paris, a particularly intoxicating and exciting time for artists like Marie, who experimented in many different kinds of media including poetry; book illustrations for such works as Lewis Carroll's "Alice in Wonderland"; set designs for Diaghilev's "Ballets Russe" and the "Comédie Francaise" in 1928; costume design; interior design; and lithography in addition to painting. Marie also took on portrait commissions for women, the most famous of which was her portrait of Coco Chanel. Her work in pastels and curvilinear designs stood as a check to the modernism of the day and defined her work as a feminine alternative to the arrogant, somewhat brash, and linear Cubism of her peers. Her works bespoke the image of the modern woman in the Art-Deco inspired Jazz Age of Paris and provided a lucrative income during the 1940's, as her works were in great demand. On June 6, 1956 Marie Laurencin died of a heart attack and was buried according to her wishes in Père Lachaise Cemetery dressed in a white dress with a rose in her hand and the letters from her first lover Guillaume Apollinaire next to her heart. 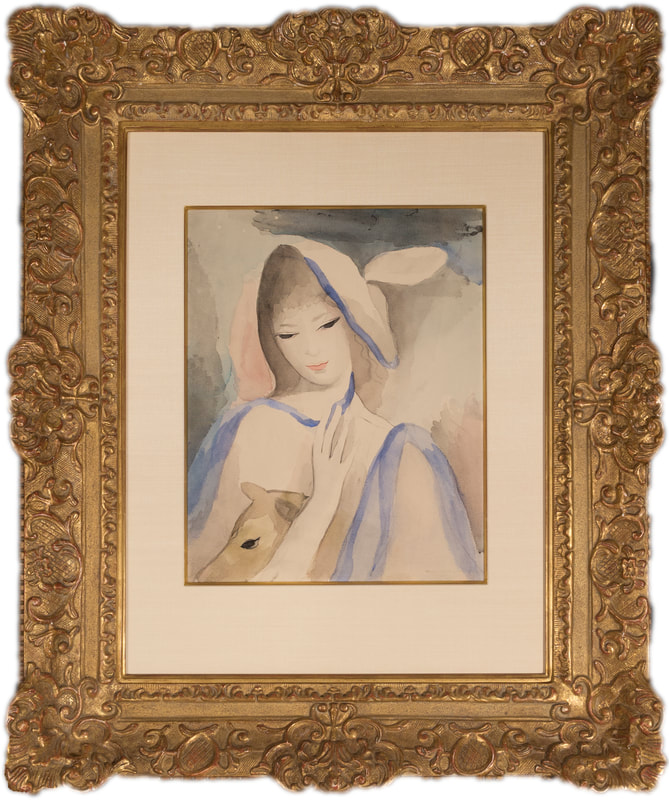