Ward Lockwood became a key painter in the Taos, New Mexico art colony. He demonstrated diverse modernist art styles including Expressionism, Cubism, Surrealism and Constructivism, which reflected his wide ranging travels in Europe and the United States.  From the 1920s to the 1960s, his work embraced a series of stylistic changes characteristic of people who influenced him, including John Marin and Andrew Dasburg.

Born in Kansas, he studied at the University of Kansas, and from 1914 to 1917 at the Pennsylvania Academy of Fine Arts where he was introduced to Modernism.  In 1917 he enlisted in the Army and served in France, where he was influenced by Paul Cezanne and Vincent Van Gogh.

He studied in Paris at the Academie Ranson, but became bored with academics, preferring to spend time at the Louvre and galleries along the Rue de la Boetie.  He painted from local models and traveled around France with fellow Kansan, Kenneth Adams.  He was impressed with the diversity of contemporary art movements including Futurism, Cubism, and Dadaism.  His work from this period shows influences of Geometric Abstraction and Impressionism.

With the idea that an artist does his best work in his own culture, he returned to Kansas, in 1922, where he worked as a commercial artist and accepted portrait commissions.

In 1926, he and his wife, artist Clyde Bonebrake, moved to Taos, New Mexico. His friend, Kenneth Adams, was already established there.  Lockwood became interested in the Taos Society of Artists, who were dedicated to a mutual effort of marketing their art work.  Modernists Andrew Dasburg and John Marin helped Lockwood loosen his style.  Watercolor became Lockwood's preferred medium because he felt that it gave him more freedom of expression.

In the 1930s, he left Taos for financial reasons.  He painted numerous murals for the Federal Arts Project and accepted teaching positions at the Broadmoor Academy in Colorado Springs. In 1938, Lockwood became Chair of the Department of Art at the University of Texas in Austin.

He served the Army in World War II, advancing to the rank of colonel, after which, he returned to California to teach. He was influenced by the modernist art environment there, exhibiting with the Abstract-Expressionist painters of the controversial San Francisco Art Association.

In 1962, Lockwood retired from teaching and returned to Taos where he died the following year. Four hundred paintings were left in his estate. 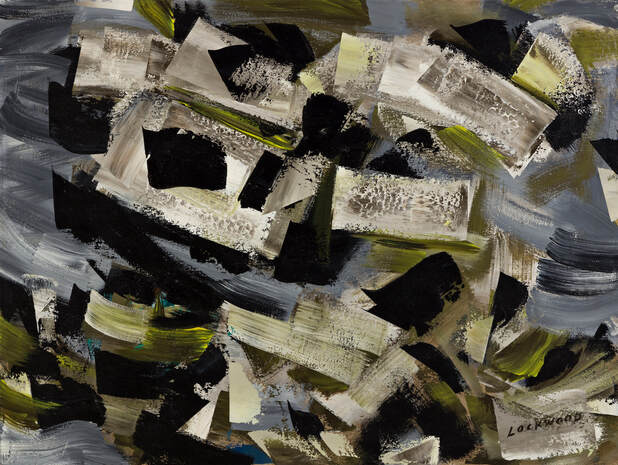