Although one of America’s most innovative post-impressionist painters, Theodore Earl Butler did not receive the recognition he deserved in his lifetime, since he was all but eclipsed by his famous father-in-law, Claude Monet. Born in 1861, Butler enrolled in the Art Students League in New York, then he studied in various art academies in Paris. Already in the Salon of 1888 he exhibited a painting that received an Honorable Mention. That summer, with Theodore Wendel, Butler discovered Giverny, the village that was to become the foremost impressionist artists’ colony. Initially inspired by Monet, who had settled there in 1883, Butler surpassed the impressionist aesthetic of Monet; using the French painter’s high-keyed palette as a springboard, he developed his own technique, and a style that forecasts elements of the Nabis movement, such as the simplification of forms, a use of pronounced contours, and flattened spatial effects.

Butler sent his paintings regularly to American exhibitions: those of the Pennsylvania Academy, the National Academy of Design and the Society of American Artists. Still tied to impressionist subject matter, Butler applied his own vivid, energy-charged brushwork, striking color, highly saturated pigment, and boldly executed compositions that anticipate the canvases of Matisse. Butler married Suzanne Hoschedé, the daughter of Alice Hoschedé, with whom Monet was living out of wedlock.

Butler exhibited at the progressive Barc de Boutteville Show in 1894, then the prestigious Vollard Gallery hosted a one-man show for Butler in 1897, however, French critics classified his art as imitative of Monet, as they joined in the anti-American sentiment of the fin de siPcle. Meanwhile he participated in the exhibitions of the Société des Artistes Indépendants and at the Salon d’Automne where the Fauves made their sensational debut. Butler traveled to New York, where he executed the innovative Brooklyn Bridge, which was very well received.

Henceforth, Butler turned from genre scenes to landscape painting. He expanded his virtuoso brushwork, Fauve-like color, fluid line, and abstraction of form. Various one-man shows took place. As an innovator, Butler took part in the Armory Show in Chicago, in 1913, then sent works to the Panama-Pacific International Exhibition in San Francisco two years later. Between 1912 and 1916 Butler executed murals for private patrons, including Cornelius Vanderbilt III. In 1917 he participated in the organizational work of the Society of Independent Artists, with John Sloan.

Limited exposure in America and anti-American sentiment in France prevented Butler from gaining the recognition commensurate with his pioneering achievements in art. Great dealers such as Le Barc de Boutteville, Vollard, and Bernheim-Jeune recognized Butler’s innovations but French critics assigned him to the shadow of his celebrated father-in-law. Butler, while remaining in the famous village, chose a more avant-garde path as he would become a leading American post-impressionist. Only recently has his proper place in the history of American art been affirmed. 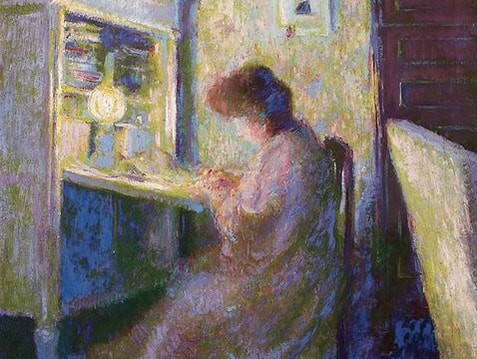