GEORGE VRANESH
American, 1926 - 2014
​
A superb colorist and ever-evolving modernist, George Vranesh pushed boundaries and pursued eclectic sources and subjects throughout his career. Born in Minnesota in 1926, Vranesh served with the U.S. Navy as a young man before enrolling at the Art Students League in New York in the mid-fifties. The relaxed structure of the program allowed for supportive exchanges of ideas between students as well as an exposure to the latest principals of modernism. The artist’s study under Will Barnet at the League was central to the development of his flattened forms and boldly colored abstractions.

Barnet as a teacher, encouraged the studying of the history of art as well as formal experimentation. Vranesh combines the purist theories of Amédée Ozenfant with the "push-pull" color theories of Hans Hofmann in vibrant abstract compositions that expertly balance geometry and color. These two theoretical systems are in some respects complementary. Ozenfant’s theories, with their emphasis on a rational ordering and analyzing of objects, provide a means of abstracting and arranging shapes. Hofmann's theories, in turn, suggest a method for understanding and organizing colors, while still allowing for their expressive and poetic potentials. Vranesh's bright, primary color compositions display the artist’s ability to transform a deep comprehension of these theories into a distinct and personal style.

Vranesh's studies in anthropology—he completed an MA degree at the University of Iowa before coming to New York—directed his interest in the art of different cultures. In his use of interlocking organic forms, which erode the distinction between positive and negative space, his paintings exhibit certain affinities with the work of the Indian Space Painters, a group that coalesced in the 1940s around an interest in Native American art and culture. However, Vranesh's titles do not overtly suggest an engagement with Native American art or mythology. Instead, his titles of the fifties evoke the familiar subjects of modern life. A prime example of his work from this period is The Couch, whose perfectly balanced composition maintains a careful spatial relationship between formal elements.

The artist traveled to Alaska every summer from 1959 to 1965, and it was there that he created drawings and sketches that served as the subjects for his Alaskan Horizons series of paintings. These works abstracted the stunning Alaskan landscape into bold color forms in red, blue, white, and black – the colors of native Alaskan art. These examples are titled for remote Alaskan locations, such as Terror Bay, or are evocative of a relationship with nature and place, such as Alaska True Blue. He also developed his talents as a printmaker and a teacher later in his career. Vranesh first exhibited with the group 10/4 in New York and later showed his work in Anchorage, Alaska and Newport, Rhode Island. 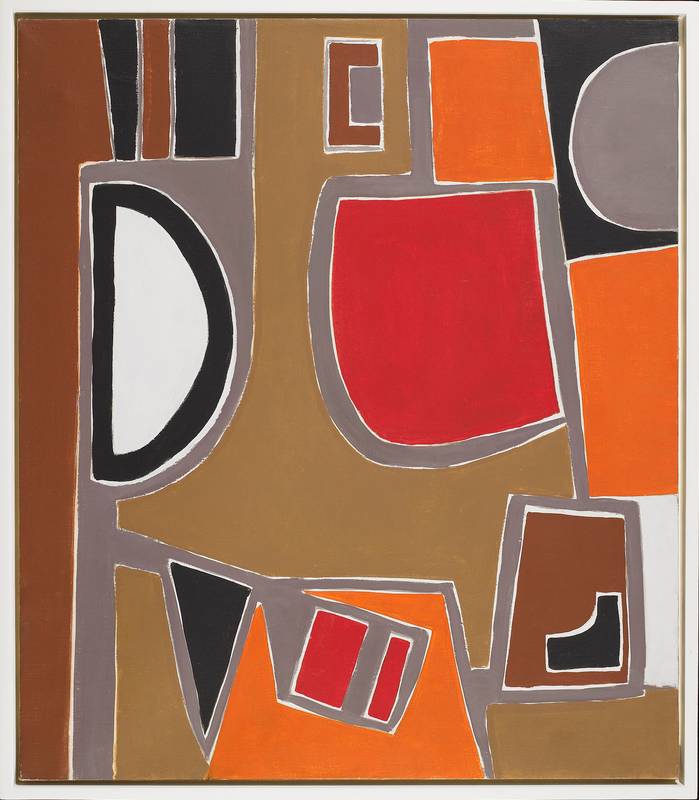